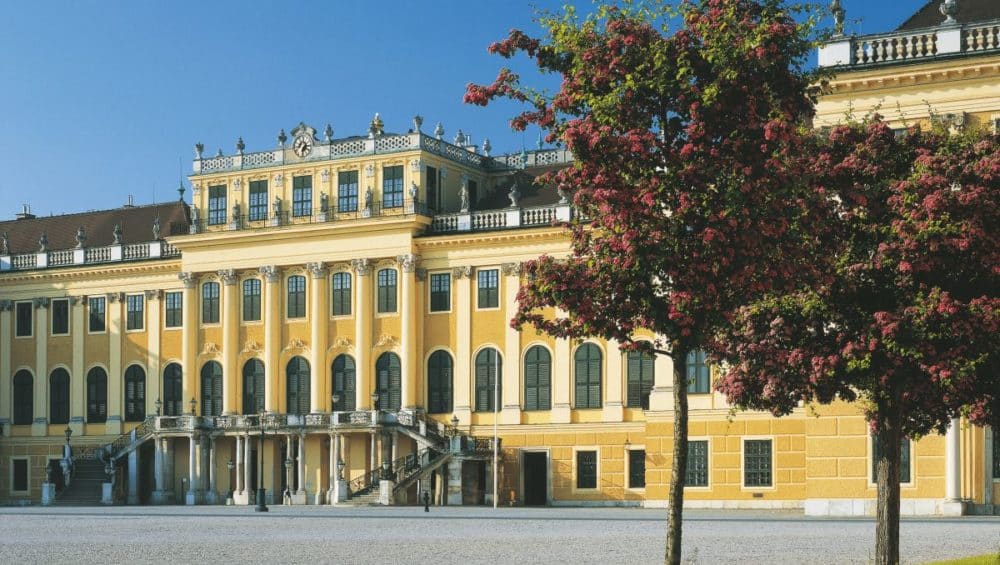 In recent years,Vienna has become one of the most beloved tourist destinations in the world. The best way to gain an insight into the city is, of course, to join our tours and see all the beauty Vienna has to offer.

We offer you our local knowledge so that you can enjoy the wonders of our city to the fullest.

Airport / Trains / Busses – getting there and away

Vienna International Airport Schwechat is located 19 kilometers southeast of the historic center of Vienna. A taxi to the city center costs around 30 Euros (40 at night), the Vienna Airport Lines buses cost only 8 Euros per person (5am to midnight) and can take you to Morzinplatz/Schwedenplatz in the city center in just 20 minutes. The well-advertised and non-stop CAT (City Airport Train) will bring you to Wien Mitte station (Landstraße) in only 16 minutes, but a one-way ticket costs 11 Euros, and the return ticket 19 Euros. If you are not in an extreme hurry, the cheapest way to get to the city center is with the suburban train (S-Bahn). Simply take any Florisdorf bound train on the S7 line, which depart twice an hour until midnight, and disembarks at Wien Mitte station. From there you will be well-connected, for example the U-Bahn line U3 connects to Stephansplatz, where the imposing St. Stephen’s Cathedral stands, right in the heart of the city center.

Trains run frequently to all neighboring regions and countries. Night trains and the faster Euro-City trains arrive from virtually every city in Central Europe. High-speed RailJet and ICE trains arrive from cities such as Munich, Budapest, Zurich, and Prague. Vienna Central station (Hauptbahnhof) is located in the 10th district, and the underground line U1 connects to Karlsplatz and Stephansplatz in the city center. One should note, though, that east bound trains often leave from West Station (West-bahnhof).

International bus lines including Flixbus, Blaguss or Eurolines offer services to many European destinations, especially in neighboring countries. Buses arrive at and leave from Vienna International Bus terminal next to the subway station Erdberg (Under-ground line U3).

The Viennese coffee house (Kaffeehaus) is a long-standing institution and plays an integral role in Viennese culture and society. You can visit them in the historic centre of Vienna or in any other district, modern ones or old fashioned ones, but please as long you are in Vienna, try to stay away from the American chains, go to traditional ones, and support the local economy! Coffee houses offer a wide selection of coffee drinks, international newspapers, as well as traditional pastries and tarts such as Apfelstrudel, Sacher Torte or Punschkrapfen. The striking design usually features marble table tops, Thonet chairs and historically-inspired interior details. The Austrian writer Stefan Zweig once described the Viennese Coffee house as “actually a sort of democratic club, open to everyone for the price of a cheap cup of coffee, where every guest can sit for hours with this little offering, to talk, write, play cards, receive post, and above all consume an unlimited number of newspapers and journals.” Since then, only one detail may have changed – a “cheap cup of coffee” means at least 3 Euros for a black coffee. Among the most famous Viennese coffee houses are Café Demel, Café Sacher and Café Central in the historic centre of Vienna, and Café Sperl in the 6th district.

In case the worst should happen, here are the most important telephone numbers in Vienna: Fire service: 122; Police: 133; Ambulance: 144, Emergency doctor (during night and on weekends): 141, European emergency: 112.

Medical care in Austria is free of charge for holders of a European Health Insurance Card. It is strongly advised, that travelers from non-European countries take out travel insurance prior to their trip to Austria.

Austria is part of the Euro zone, and uses the Euro as its currency accordingly. If you need to exchange money, it is most advisable to visit an exchange bureau in the city center, as it may well offer better rates than you will find at your hotel or at the airport. Nonetheless, check if there are any fees and compare the offered rate to the mid-market rate to determinate the fairest service. ATMs are a good alternative for accessing your cash at a fairer rate than you may be offered in an exchange shop. Check whether your home bank has partnerships with any local banks in Vienna. If they do, you should be able to use their ATMs for a reduced or waived fee. When using an ATM, always choose to be charged in Euro to make sure that your money is converted at a fairer rate.

Vienna is a very safe city, especially in the historic center you don’t need to worry! In general, you will not have trouble walking around at night, although there are some areas that you should avoid in order not to encounter dodgy figures: the area around Praterstern station and the metro and tram stops along Margareten Gürtel and Wiedner Gürtel. Apart from that, just follow the usual rules: keep in mind that pickpockets feel most comfortable in large crowds or around the current tourist hotspots. Don´t trust vendors dressed up as Mozart, who are typically stationed around tourist locations – especially in front of St. Stephen’s Cathedral (Stephansdom) and the State Opera House (Staatsoper). All of them try to sell tickets for classical concerts, but some are pedaling tickets with hugely inflated prices for shows, that do not deserve to be called concerts. And be aware of cyclists and cycle paths! They are everywhere in Vienna. The cyclists are fast and they don’t give way when you accidentally set foot in their cycle path!

The majority of hotels and hostels in Vienna offer free internet access. In addition, you can use around 400 free WiFi hotspots (40 in the 1st district) across the city, for example at Stephansplatz (the area around St. Stephen’s Cathedral in the historic center of Vienna), MuseumsQuartier (home to the Leopold Museum, Mumok, and the ZOOM Children’s Museum, amongst many others), Naschmarkt, Prater, and Donauinsel (Danube Island), as well as in many train and subway stations.

Be aware that jaywalking in Vienna can become an expensive exercise, as traffic rules in Austria also apply to pedestrians! The fine for crossing the street at a red pedestrian light can amount to 140 Euros. So, it’s better to stop and wait for the green light. While you wait, have a closer look at the little figures in the traffic lights: At around 50 pedestrian lights, especially in the inner city, you will not only see a standing or walking man, but couples – either straight or same-sex couples. The new traffic light symbols were introduced in May 2015 as Vienna was preparing for the Vienna Life Ball and Euro-vision Song Contest and are intended to underline Vienna´s role as an open-minded city and highlight the diversity of its population. As the international media response to the campaign was overwhelming, the City Council decided to keep them as permanent fixtures of the societal landscape.

Endearing yourself to the Viennese

There are two rankings in which Vienna is listed in the top position regularly: The city has won several times the title of “most livable” city in the world. And there is another survey that came to the conclusion, that Austria´s population is considered by expats one of the most grumpy in the world. But don´t worry! Though the Viennese may seem a little grumpy on the surface, you will quickly see that they have hearts of gold.

Here are a few tips to help you endear yourself to the Viennese:

1. Use the local greeting. “Grüß Gott!” (pronounced groos got, with a slightly rolled r and the emphasis on groos) Even if you don’t speak any German, learning a few polite words will instantly stand you in good stead to experience the very best hospitality Vienna has to offer.

2. “Danke” (“thank you”) – let’s face it, being able to show gratitude in the local language never goes astray.

3. “Bitte” is an enormously useful word – it means both “please” and “you’re welcome”. So you can add it to a request, or use it when someone says “Danke!” to you.

Even with only this much knowledge of the language, you can already politely order coffee or anything on the menu, and show your gratitude when it arrives at your table!

There is simply so much to see and do, not only in the historic centre of Vienna, but also on the outskirts of this wonderful city. Here is a list of our top 10 experiences to enjoy during your stay.

1. Saint Stephen´s Cathedral (Stephansdom), the iconic landmark of Vienna and of Austria.

2. Schönbrunn Palace, Sisi‘s former summer residence, and the Imperial Palace (Hofburg), from where the powerful empire of the Habsburg was ruled.

4. Visiting a coffee house and trying the pastries, especially our Apfelstrudel, but all of them are delicious!.

5. Having a Wiener Schnitzel or another hearty traditional meal at a “Beisl”, a typical Austrian restaurant.

6. Tasting local wine at a “Heurigen”.

7. Visiting the State Opera (Staatsoper) or a classical music concert at the Musikverein.

8. Taking a ride on the Ferris Wheel at Prater to see this stunning city from above.

9. Going to a museum (to see all the wonderful treasures you would need several weeks – so maybe you need to choose between the Museum of Fine Arts (Kunsthistorisches Museum), the Natural History Museum (Naturhistorisches Museum), the Museum of Applied Arts (Museum für angewandte Kunst), the Leopold Museum (featuring numerous works of Schiele and Klimt), the Upper Belvedere (home to the world´s largest Klimt collection and “The Kiss”), or the Albertina (Dürers “Hare”). You’re spoiled for choice!

10. Exploring the beautiful Danube area in Summer, or experiencing the magical atmosphere of the Christmas Markets (Weihnachtsmärkte) in Winter.

In order not to offend locals, try to avoid some rookie errors: Don´t order a cappuccino – in Vienna it´s a Melange! The same applies to mixed drinks with soda: Don´t call it Schorle, the correct word is Spritzer – doesn´t matter if you fancy a white wine with soda (Weißweinspritzer), equivalent to the national drink, or just a fruit juice with soda (e.g. Apfelspritzer). And never ever think about fare-evasion on public transport! Travelling without a valid ticket costs 103 Euros if you are caught in one of the sporadic controls.

And last, but certainly not least …. Don’t call Austrians Germans. That’s the biggest mistake you can make!